As our Clinical Educator, Catherine Connor is at the forefront of our mission to empower Yolngu people to regain control of their health. Yet just two years ago, Catherine was a retiree on the shores of Port Stephens, NSW. We asked Catherine about life full of tragedy and triumph, and why she switched retired life with work at Miwatj.<br /> 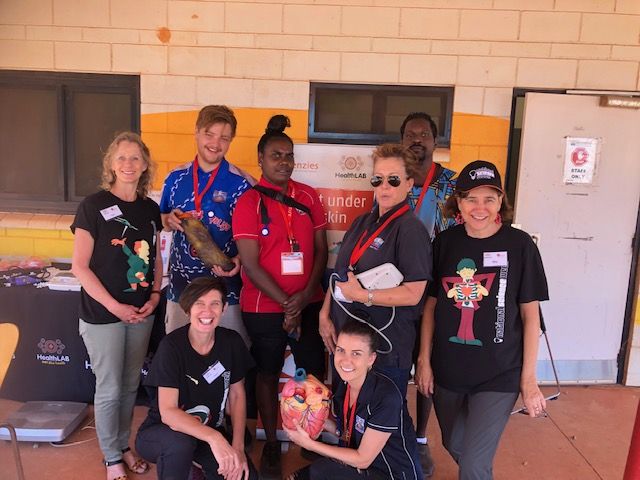 As we chat to Catherine, she’s running around the meeting room at our Nhulunbuy clinic, setting up for the following day’s lesson for Aboriginal Health Practitioner (AHPs) students.

Catherine is responsible for educating and supporting the next generation of AHPs across seven clinics in Arnhem Land. She loves the sense of community, the opportunity to travel and the chance to have an impact – big or small.

“I have a sign on my desk that says, ‘You wouldn’t believe what happened today.’ So much happens in one day out here. I love the variety. My job allows me to get things done, as opposed to being in an organisation where I am one in 400. I’m my own boss. Of course, there are immense challenges associated with the systemic health problems and chronic disease we see here. A good support base is key in dealing with some of these issues – and I’m glad I can be part of the solution.”

Catherine’s new lifestyle is a far cry from the world she left behind. Just two years ago, Catherine had retired to the beaches of Port Stephens with her partner – but there was one problem.

“It was too boring. So I joined a healthcare agency and was flown to far north Queensland, Tasmania, King Island and Arnhem Land. I really enjoyed working at Miwatj’s Malmaldharra clinic. The manager suggested I apply for a permanent role in April 2018 – and the rest is history.”

Early days of triumph and tragedy

“At school, I excelled in chemistry and mathematics. I originally planned to go to university to become a doctor. When I didn’t get the grades, I thought I would become a sports psychologist. At the time, my friend told me that she was starting nursing on Monday. I thought, ‘Why not?’ So I joined her.”

In 1982, as a student nurse, Catherine fell pregnant unexpectedly and was pressured by her partner’s parents to adopt her baby out. However, when her daughter was just two years old, Catherine was contacted by her daughter’s adoptive parents. She has been close with her daughter and her adopted family ever since.

In 1990, Catherine married her partner and started work as a Nurse in Gove then Kalgoorlie. She went on to run a series of her own businesses in drug testing, first aid training, hearing tests and lung tests. However, her world came crashing down when her husband (whom she had recently separated from after being together for 22 years), was tragically killed in a car accident in 2000). In mourning, Catherine moved to Claremont near Perth. It was there that a neighbour would set her on a new adventure.

A sensational career on set

“My neighbor was a wanna-be actor. She worked as a film-set nurse. As she was a single mother, I babysat her kids and we took turns working on set. Between the two of us, we looked after two crews in Perth and around WA. We did commercials, movies and TV series… Cloudstreet, the Sleepover Club and Brand Nue Day, My Kitchen Rules, My House Rules, Master Chef…. We had a blast! I loved it. I met my partner Colin who worked with the camera crew on the set of Brand Nue Day.”

In 2015, Catherine and Collin travelled to Turkey to work on their last film, The Water Diviner, with Russell Crowe. Upon returning to Australia, they packed their caravan and travelled across Australia for over a year.

Bringing the caravan back to home-base, Catherine and Collin bought a house and retired in Port Stephens. It was at this time that Catherine signed up to a health services agency and then found herself in a permanent position at Miwatj.

“When I first came to Miwatj, I was on one of our most remote islands. I stood in a corridor on my own and thought ‘Oh good lord. What have I done?’ But I’ve come to love the variety within my role, my level of responsibility and my connection with the community.”

1) Give remote life a go
“If you’re unsure if remote work is right for you, just give it a go. There’s a fantastic program known as READ which connects Indigenous children who are learning English with retirees. The program goes for a minimum of one month and provides a vital service to the community while giving retirees the chance to try out remote life.”

2) Embrace it and enjoy it
“If you fall in love with life out here, then embrace it. I take my students under my wing and teach them life skills as well as medical skills. Drawing from your vast career and life experiences, you have a lot to offer. But so much to learn as well.”

“When I first came to Miwatj, I was on one of our most remote islands. I stood in a corridor on my own and thought ‘Oh good lord. What have I done?’ But I’ve come to love the variety within my role, my level of responsibility and my connection with the community.”