Nhulunbuy was established in 1964 when a bauxite mine and deep-water port were built.

Nhulunbuy is situated beside the Arafura Sea on the Gove Peninsula of North-East Arnhem Land. Today, with a population of 3,274 (2016 Census) it is the fourth largest township in the Northern Territory.

Nhulunbuy and its surrounding areas are Aboriginal owned private lands, with the township, mine, refinery and other areas covered by special leases.

This region is also home to the Garma Festival, Australia’s leading Indigenous event. Garma is an annual celebration of the cultural, artistic and ceremonial traditions of the Yolŋu. 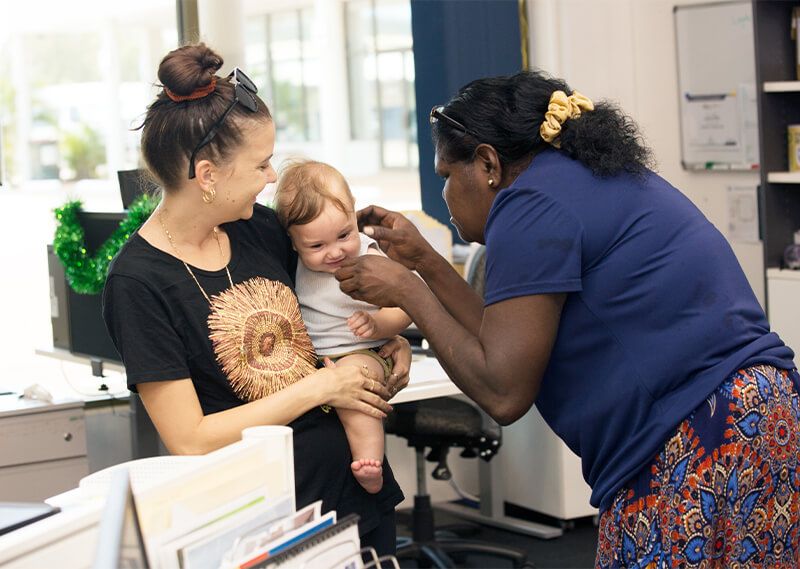 Aboriginals and/or Torres Strait Islanders represent 66% of Nhulunbuy’s total population. The median age is 32 years and 36% of the population speak Djambarrpuyŋu, while Dhuwaya, Gupapuyŋu, Dhuwala and Dhaŋu are also prevalent. (2016 Census)

Our Nhulunbuy Clinic provides comprehensive primary health care services for all our communities.

Miwatji Health’s Head Office is base in Nhulunbuy and the administration building provides a base for non-clinical programs including the Raypirri Rom Well-being Program, which helps maintain the safety and well-being of families.

We also provide programs for Alcohol and Other Drugs (AOD) and Volatile Substance Abuse (VSA) across the Gove Peninsula.

Other health services in the township include the Gove District Hospital, a private GP clinic, a private dentist and allied health providers.

Nhulunbuy has all the facilities of any modern town. There are two shopping centres, cafes and restaurants and a swimming pool.

Located near the confluence of the Gulf of Carpentaria and the Arafura Sea, this region offers some of the best blue water and river fishing experiences in Northern Territory.

The Gove Peninsula is serviced by AirNorth.